Glenda Ritz may present herself as an educator, not a politician. But she gave a politician’s answer when asked Monday if she would consider running for governor of Indiana.

“I’m perfectly happy where I am,” the Indiana superintendent of public instruction said, before reciting a list of accomplishments that could justify a run for higher office.

“I would love to have a governor that supports me,” Ritz said. And she added, regarding the question about running for governor herself: “I hear that a lot. Almost daily.” 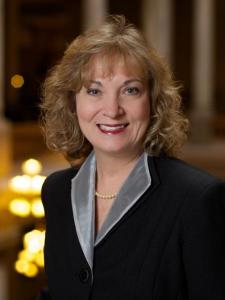 Ritz spoke in Bloomington at a luncheon meeting of the Bloomington Press Club and then headed off to visit a couple of local schools and appear at a rally for Jeff Sparks, a Linton school administrator who is running for a seat in the Indiana House of Representatives.

In office for barely 20 months, Ritz seems to have visited schools and met with civic groups in every corner of the state. This sends a message that the state education chief cares about what’s going on in local classrooms. It also raises her profile with prospective voters leading to the 2016 election, when she will be up for re-election – assuming, that is, she’s not the Democratic candidate for governor.

In her Press Club remarks, Ritz covered mostly familiar territory. But she seems to have grown more comfortable and confident in laying out her talking points:

Looking ahead to the 2015 legislative session, Ritz said her primary concern is that lawmakers will shift the implementation of education policy from the Department of Education, which she heads, to the Center for Education and Career Innovation, the rival agency created by Republican Gov. Mike Pence. So it makes sense that she’s campaigning for Sparks and other friendly legislative candidates.

Meanwhile, a lot could change between now and the 2016 elections. Pence is positioning himself as a presidential prospect; if his campaign catches fire, it could throw the open a path to the governor’s office at a time when there’s no clear GOP back-up option.

On the Democratic side, former Gov. Evan Bayh recently took himself out of the picture. Former House Speaker John Gregg, who ran a solid race against Pence in 2012, appears to be interested in running again. But Ritz would have to be on any list of prospects.

It may be a long shot, but two years ago, no one gave Ritz a chance of beating Republican incumbent Tony Bennett. She won, even though Bennett outspent her, 5-to-1. Run for governor? Stranger things have happened.