I wasn’t going to write about how Indiana charter schools fared this year under the state’s school grading system. But then Gov. Mike Pence released his 2015 legislative agenda, which calls for doubling down on charter schools and vouchers. So here goes.

And when measured by Indiana’s school grading system – which the governor likes to cite in calling for more high-quality schools — charter schools aren’t better.

But of course, that’s not a fair comparison. Charter schools tend to be located in urban areas, such as Indianapolis, Evansville, Fort Wayne, Gary, Hammond and South Bend. 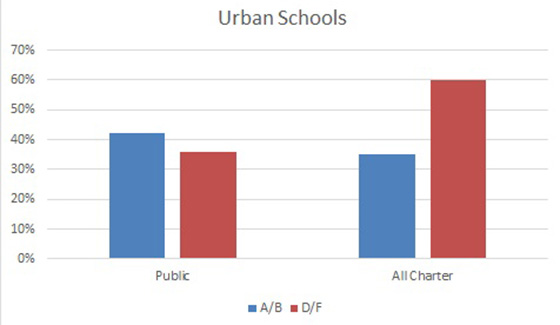 OK, what if we compare schools serving high-poverty populations? Let’s look at schools where at least 80 percent of students qualify for free or reduced-price school lunches.

At the state level, the big push for charter schools has come from business and political leaders in the state capital, with a focus on creating alternatives to IPS. The Indianapolis mayor’s office can authorize charter schools, as can colleges and universities and the Indiana Charter School Board.

It’s true, as City of Indianapolis charter schools director Brandon Brown rightly points out, that authorizers matter when it comes to charter school effectiveness. The mayor’s schools have a better record than those authorized by Ball State, for example.

That’s partly because the mayor’s office has been aggressive about closing charter schools that underperform. But closing schools after families make a commitment to them brings its own set of issues; witness the unhappiness over the closing of the Indy Project and Flanner House schools.

All of this isn’t to say that charter schools are bad or that they may not sometimes serve a purpose. But Pence’s suggestion that Indiana should invest more of its limited education funds in charter schools seems at odds with the evidence.

An alternative would be to do what Democratic state Rep. Greg Porter has suggested: Pause, re-evaluate, figure out what’s working and what isn’t. And recognize that charter schools may not be the great boon for education that some people continue to think.

*For simplicity’s sake, I use the term “public schools” to refer to schools operated by public school districts. We can argue over whether charter schools should be called public schools. But they aren’t public in the sense of being run by school boards that are accountable to the public. As always, readers are encouraged to check the calculations and point out any errors in this post — or simply to disagree.

12 thoughts on “No magic to charter schools”