Education advocates in Indiana have a unique perspective on the radical school-choice policies that Betsy DeVos is promoting as U.S. secretary of education, said Teresa Meredith, president of the Indiana State Teachers Association.

Hoosiers have seen how a school voucher program that was sold as a way to help poor children escape “failing” schools can evolve into something quite different: an entitlement for middle-class parents to send their children to religious schools at public expense.

“In Indiana, the voucher program has really changed,” Meredith said in a phone interview. “There is now no cap on the number of vouchers. Families with a really decent income can qualify. And the data are telling us that most kids getting vouchers are already in private schools, or that was the family’s plan all along.”

DeVos came to Indianapolis Monday to speak at a policy summit of the American Federation of Children, the pro-voucher advocacy group that she formerly chaired. She was expected to unveil the Trump administration’s school-choice proposal but offered few details.

She did say it would be “the most ambitious expansion of school choice in our nation’s history.” She said states would be able to opt out of the expansion, but it would be “a terrible mistake” to do so. She derided voucher opponents as “flat-earthers” who are trying to keep education in “the Stone Age.”

Across the street from the hotel where DeVos spoke, public-school advocates organized by Indiana teachers’ unions rallied in opposition. (You can watch a video of the rally/news conference posted at 5:31 p.m. Monday on the ISTA Facebook page). They argued that vouchers divert money from public schools to private schools that aren’t accountable to the public and can refuse to enroll children they don’t want. END_OF_DOCUMENT_TOKEN_TO_BE_REPLACED

Secretary of Education Betsy DeVos will reportedly unveil a proposal for federal private-school scholarship tax credits Monday in Indianapolis. That makes a recent report on the topic especially timely.

The report, “Public Loss, Private Gain: How School Voucher Tax Shelters Undermine Public Education,” was released last week by AASA the School Superintendents Association and the Institute on Taxation and Economic Policy. It describes how 17 states, including Indiana, divert $1 billion to tax credits for contributions to private K-12 schools, including religious schools. 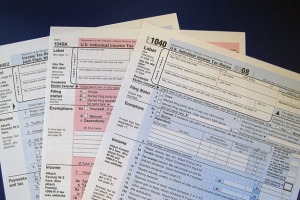 Remarkably, nine states provide a 100 percent tax credit for the scholarship donations. Taxpayers who make such donations get back every penny from the state, tax-free. Some can even make a profit on their contribution by claiming an additional deduction on their federal taxes.

Report co-author Carl Davis said that, in those states, donors may not even have a charitable interest in private schools or their students. It’s simply a risk-free scheme to make money while, in some cases, getting around prohibitions on public funding of religious schools.

“I don’t see how you can help but draw the parallel to money laundering,” Davis told Jennifer Berkshire and Jack Schneider in an episode of the “Have You Heard” podcast devoted to the tax credits. “It’s certainly more like money laundering than charitable giving. There’s no charity involved.”

Indiana’s scholarship tax credit is 50 percent; in other words, a taxpayer who donates $1,000 gets back $500, plus any savings from a federal deduction. There is no limit on the size of an individual’s state credit. There is an annual cap on the total tax credits the state will award, but the legislature voted last month to increase it: from $9.5 million this year to $12.5 million next year and $14 million the year after. END_OF_DOCUMENT_TOKEN_TO_BE_REPLACED

Jennifer McCormick, Indiana’s superintendent of public instruction, is showing herself to be a principled advocate for public schools, even if it means defying Republican orthodoxy on private school vouchers.

After six years of experience with a fast-growing and largely unregulated voucher system, she told National Public Radio reporters, it’s time for Indiana to take a serious look at the program.

“You know, we’re spending roughly $146 million on a program and not really reviewing it. That is irresponsible,” said McCormick, a Republican who took office in January.

END_OF_DOCUMENT_TOKEN_TO_BE_REPLACED

Indiana is in a small club when it comes to having charter schools authorized by private colleges and universities. And the state’s hands-off approach to letting certain faith-based colleges authorize charter schools … well, that seems to be in a category by itself.

This topic came up last month when the Indiana Coalition for Public Education-Monroe County sued over the state’s charter-school law. The lawsuit raised a question: Is Indiana the only state that delegates the power to open a public school – an essential government function — to religious institutions with no state oversight.

That means there are presumably eight states in which private colleges could authorize charter schools. But in practice, there are only three states where they have done so: Minnesota, Missouri and Indiana.

END_OF_DOCUMENT_TOKEN_TO_BE_REPLACED

School funding referendums were approved Tuesday in six of the eight Indiana school districts that asked voters to increase their own property taxes to help pay teacher salaries and other expenses. That sounds like strong support for public education.

But several successful referendums were in affluent communities where voters can afford to pay a few more dollars for the high-achieving schools that are key contributors to their property values. Referendums failed in two high-poverty districts – East Chicago and Cannelton – where students may have the greatest need for extra money.

The bigger issue is that most of Indiana’s nearly 300 school districts have never voted to raise local taxes to increase local school funding, and most probably never will.

Only about 40 Indiana school districts have approved school tax levy referendums since the referendum system began eight years ago. Most have never tried, because officials know the effort would probably fail. It’s not that people don’t support their local schools; it’s that the tax base is often so weak that it would take a big rate increase to make a difference – which could hurt many property owners.