Education in Indiana went through a huge transformation around 50 years ago, when a wave of school consolidations dramatically reduced the number of small school districts. With the Indiana Chamber of Commerce pushing for more mergers, now is a good to time to revisit that history.

The impetus was the Indiana School Reorganization Act of 1959, which called for each county to develop and implement a reorganization plan. The effort reduced the number of school districts from 966 to 402. Districts with fewer than 1,000 students fell from 801 to 156. 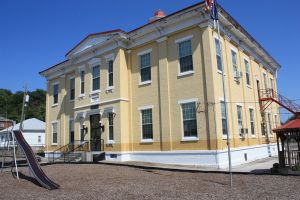 Myers Grade School in Cannelton. Cannelton is one of the smallest districts in Indiana with about 260 students in grades K-12.

“It was a remarkable change,” said longtime Indiana school administrator Harmon Baldwin, who was one of many local decision-makers in the school reorganization process.

Some school districts reorganized earlier, paving the way for a statewide law. Baldwin credited Howard County with the first modern-day consolidation in the 1940s. In Marion County, township districts built new, modern high schools and moved to being governed by school boards rather than township trustees. But they rejected merging with Indianapolis city schools.

“The American High School Today,” an influential report by retired Harvard president James B. Conant, was published in 1959 and reinforced the push for consolidation. Conant argued that modern high schools needed to be large enough to have 100 students in each class.

Indiana settled for a bit less, setting a standard of at least 1,000 students in each district, which would have meant a minimum of about 80 students per class in a one-high-school district. Another guideline was that each district should have at least $5,000 in assessed property value per student.

The state didn’t force schools to merge, however, and there were hold-outs. Even today, there are 53 school corporations with fewer than 1,000 students. Indiana is near the middle of the states when it comes to average school-district size.

“Heavy was a political realist,” Baldwin said. “He recognized that, while there were standards, maybe the best thing was to clear the slate and get what he could get at the time.”

Baldwin, who was a school superintendent in Bloomington, Terre Haute and Indianapolis Wayne Township as well as North Manchester, said large districts have obvious advantages, like having bigger high schools that offer more advanced courses and electives. But smaller districts may have the edge when it comes to knowing all their students and treating them as individuals.

Another question is whether school districts have the financial capacity to meet their students’ needs. Many of Indiana’s school buildings, especially its high schools, were built during the 1960s consolidations and are due for replacement or expensive renovations.

Baldwin’s own roots are in Miami County in north-central Indiana, and he grew up at a time when nearly every small town and rural township had a high school. When the school reorganization law came along, he was superintendent in North Manchester and drew the task of writing the Wabash County plan.

“The Wabash County committee was composed of compatible people, focused on their task,” he said. “The task was relatively easy. Writing the plan became an exercise, following state guidelines.”

It didn’t go so smoothly everywhere. In some counties, debates grew heated as residents of rural areas and small towns resisted consolidation or disagreed about how it should happen. My uncle, Curtis Melloncamp, was trustee of Grassy Fork Township in Jackson County and angered some of his constituents by backing the consolidation that merged Tampico schools with schools in Brownstown.

“Some of the opposition came because the small schools were losing their basketball teams,” Baldwin said. “The basketball team was associated with the community, and they didn’t want to give that up.”

That’s certainly true, and it’s also the case that, as historian James Madison has written, the Indiana way is a cautious and conservative way. Hoosiers accommodate themselves to change, but only when they’ve been persuaded it’s appropriate or necessary.

That makes it even more remarkable that so many of them, in the conservative era of the late 1950s and early 1960s, embraced rapid educational change in the interest of better schools for their children.