Multiracial students, students who qualify for free or reduced-price lunch and special-needs students are also more likely than their peers to be suspended, the data show.

This is alarming but not surprising. Disparities in discipline have been studied by academics and reported by the news media. Some research has found students of color are more likely than white students to be punished for the same behavior. A General Accountability Office report found that black students made up 15 percent of students in public schools but accounted for 39 percent of suspensions.

Experts point to a variety of causes, including zero-tolerance policies, implicit bias by teachers and administrators and a lack of awareness of alternative approaches to discipline.

Out-of-school suspension is tied to lower achievement, higher dropout rates and other adverse outcomes. If students aren’t in school, they aren’t learning and they’re more likely to grow discouraged and give up. Advocates say suspensions contribute to the “school-to-prison pipeline.”

END_OF_DOCUMENT_TOKEN_TO_BE_REPLACED

Legislation aimed at promoting positive school discipline and reducing the number of students who are suspended or expelled has been approved by the Indiana House and sent to the Senate. As amended in the House, the bill doesn’t mandate better policies, but it’s a step in the right direction.

It would be a bigger step, however, if lawmakers extended their reach to charter schools, including “no-excuses” charter schools that use strict discipline to enforce compliant student behavior.

None of that is controversial, and the bill passed the House by a vote of 92-0.

END_OF_DOCUMENT_TOKEN_TO_BE_REPLACED

Update: The House Education Committee approved HB 1421 by a vote of 8-5. That sends it to the full House for possible amendments and further consideration. If it passes the House, it will go to the Senate for more of the same. Supporters said the bill is a “work in progress” that needs to be revised to ensure that it’s effective. But they said punitive discipline is a serious issue that lawmakers should address.

Indiana child advocates are promoting legislation that would discourage schools from suspending and expelling students and encourage “positive discipline strategies” that keep students in school.

The legislation, House Bill 1421, is scheduled to be heard this morning by the House Education Committee. It would revise state law on school discipline to prioritize positive, research-based approaches, including restorative justice and culturally responsive practices.

“Our interest is in keeping kids in school and preventing them from going into the criminal-justice system,” said JauNae Hanger, president of the Children’s Policy and Law Initiative of Indiana.

The legislation calls on school corporations to create policies that reduce suspensions and expulsions and address disparities in how students are disciplined. It says students should be removed from school only for serious offenses, not for being tardy or skipping school. Students should be arrested or referred to law enforcement only to protect public safety, the bill says.

END_OF_DOCUMENT_TOKEN_TO_BE_REPLACED

Indiana legislators could be on their way to doing something important for the state’s students. Bills have been filed in the House and Senate that would pull back from the harsh school discipline policies that have been in place since the “zero tolerance” philosophy swept the nation in the 1990s.

“These are very good bills, with three or four noteworthy provisions,” said Russell Skiba, education professor and director of the Equity Project at Indiana University. “It’s certainly encouraging that the leadership in both the House and Senate is behind this.”

The proposals result from recommendations developed last fall by the legislature’s interim study committee on education. The Children’s Law and Policy Initiative, the Indianapolis NAACP and other groups have been pushing for these sorts of changes.

Driving the bills is concern about overuse of suspension and expulsion, often for minor offenses. Research has found large disparities in how discipline is applied, with minority students punished more harshly than white students for the same offenses. Indiana has some of the worst disparities in the nation, according to federal data. END_OF_DOCUMENT_TOKEN_TO_BE_REPLACED

Indiana schools are among the nation’s leaders in an unfortunate category: the rate at which they suspend and expel students of color. That’s according to the Civil Rights Data Collection report issued last month by the Department of Education.

The report includes extensive data for 2011-12 from nearly all U.S. public schools and highlights equity issues ranging from availability of preschool to distribution of experienced teachers to access to challenging high school courses.

Some of the starkest disparities were in school discipline. Black students faced out-of-school suspension and expulsion at three times the rate for white students. And in Indiana, the numbers were higher: 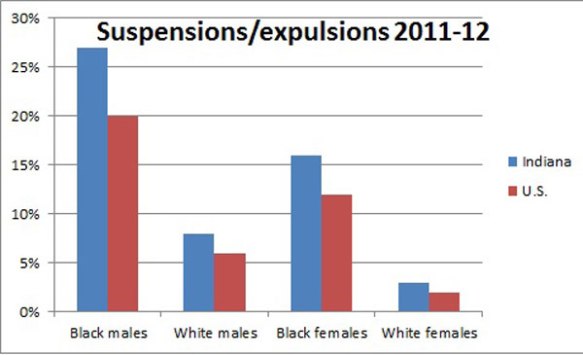 Some folks are sure to suggest poverty, class or culture, and not race, account for the disparities in discipline. But researchers with the Discipline Disparities Research-to-Practice Consortium, including Indiana University professor Russell Skiba, have shown it’s not that simple. There’s evidence that African-American youth are more likely to face harsh penalties for offenses that might draw a slap on the wrist for others.

At any rate, discipline is an educational issue, not just a civil rights issue. When kids are suspended or expelled, they aren’t learning, and they’re arguably apt to become discouraged and alienated. As Skiba, Anne Gregory and Pedro Noguera argued in a 2010 paper, the discipline gap and the achievement gap may be “two sides of the same coin.”