You can look back nearly 100 years and watch as America took a serious wrong turn on race. Indiana, too.

Lynchings were widespread in the years right after World War I. Jim Crow laws solidified, and not just in the South. White mobs killed hundreds of African-Americans, including women and children, in East St. Louis, Illinois, Rosewood, Florida, Elaine, Arkansas, and Tulsa’s Greenwood district.

Indiana didn’t record incidents as horrific as those, but, as Emma Lou Thornbrough describes in the 2001 book “Indiana Blacks in the 20th Century,” the 1920s saw a rise in racial bias and racist policymaking that helps explain why Hoosier schools and communities are so divided by race today. 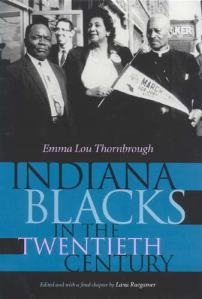 “The most conspicuous and lasting evidence of the rising tide of racial prejudice,” Thornbrough writes, “was the effort to segregate housing, by preventing blacks from moving into neighborhoods that white homeowners declared belonged exclusively to them, and to segregate all white and black pupils in separate schools.”

This was the era when the Ku Klux Klan wielded more power in Indiana than in any other state. It gained control of the Republican Party and elected candidates for governor, state legislature, city councils and school boards. It was estimated that 25 percent of native-born white men were members.

But the Indiana Klan of the 1920s was focused less on blacks than on immigrants, Catholics and booze, as historian Jim Madison has explained.The segregation of Indiana schools and neighborhoods was driven by white civic leaders, chambers of commerce and real estate organizations as well as by racist groups called the White Supremacy League and the White People’s Protective League.

Indiana law passed in 1869 said that public schools should be available to all students, regardless of race; but communities were encouraged to establish separate black schools, and many did. In Bloomington, where I live, black students attended a separate school through eighth grade until 1951.

In Indianapolis up to the 1920s, black students attended elementary schools located in the black neighborhood, while black and white students attended the same high schools. But as the city’s black population grew with the Great Migration, whites demanded separate schools.

In 1923, the Indianapolis school board drew attendance boundaries to create separate elementary schools for black and white students. In 1924, the board agreed to build a separate high school for African-Americans. Crispus Attucks High School opened in 1927. Other Indiana cities with large black populations also established racially segregated high schools, including Lincoln in Evansville and Roosevelt in Gary.

Thornbrough writes that, contrary to myth, it wasn’t a “Klan school board” that decided to build Attucks. The decision had already been made when board members backed by the Klan took office in 1926.

A Klan-backed Indianapolis city council did adopt a racist zoning law to prevent blacks from moving into white neighborhoods. A judge struck down the law; but red-lining, restrictive deed covenants, decisions on where to build public housing and “white flight” kept neighborhoods segregated for decades.

In 1949, the year I was born, the Indiana legislature voted to prohibit racial segregation of public schools. The state scrapped Jim Crow schools – on paper, anyway – five years ahead of the Supreme Court’s Brown v. Board of Education decision.

But Indiana schools are still segregated by race, ethnicity and family income, according to a 2017 study and data visualization by the Center for Evaluation and Education Policy at Indiana University. The legacy of the 1920s lives on.