Indiana’s school voucher population is getting whiter, more affluent – and a whole lot bigger. That’s the conclusion to draw from a report on the voucher program released this week by the Indiana Department of Education. A few highlights:

Indiana taxpayers are paying more than $116 million this year for tuition at 314 private schools – nearly all of them religious schools, and almost all of those Christian schools.

And vouchers are going to families that are far from poor.

For a family that makes up to 185 percent of the federal poverty level, students get 90 percent of what it would cost for them to attend the local public school, typically over $5,000 a year. (The amount is currently capped at $4,800 for grades K-8).

Students from families earning up to 277 percent of the poverty level qualify for 50 percent of the cost of attending the local public school. And they don’t lose the vouchers if the family’s income rises, up to 370 percent of poverty. END_OF_DOCUMENT_TOKEN_TO_BE_REPLACED

The Indiana House Republicans vowed to equalize school funding, and that’s what they are doing with the budget they put forward this week. They’re doing it by taking from the poor and giving to the rich.

High-poverty school districts will still get more money, per pupil, than low-poverty districts. But the gap narrows. Schools with the most challenging demographics will do with less.

That said, the House plan would do better by public schools than Gov. Mike Pence’s budget proposal. It provides more money: Increases of 2.3 percent each of the next two years compared to Pence’s 2 percent the first year and 1 percent the second year. And under Pence’s proposal, fully 30 percent of the K-12 funding increase in fiscal 2016 would have gone to charter schools, which serve less than 3 percent of Indiana students.

The House plan keeps Pence’s $1,500-per-pupil grant program for charter schools. But unlike the governor’s it would fund the grant with a $20 million per year budget line – it wouldn’t take the money out of the pot for regular public schools. And the charter-school grants could pay only for buildings, technology and transportation, not for teacher salaries and regular operating expenses. END_OF_DOCUMENT_TOKEN_TO_BE_REPLACED

What if Indiana hadn’t dumped Common Core and fled the PARCC consortium? Would we still be having this brouhaha over how long our students are sitting for standardized tests? Yeah, probably.

Many of us were taken aback when we learned last week that the time it takes to complete the ISTEP+ exam has more than doubled since last year. But longer tests seem to go hand-in-hand with the more rigorous “college and career ready” standards that Indiana and other states are adopting.

Anne Hyslop, who follows testing and accountability issues as a senior policy analyst with Bellwether Education Partners, believes tests are getting longer because they include performance tasks and writing sections that attempt to better reflect whether students are learning the standards.

“In other words, if you want a high-quality test, you need high-quality items, and those may take longer to complete than a multiple choice question,” she said.

Back when Indiana had adopted Common Core and its teachers were preparing to implement the standards, it was part of PARCC, a consortium of states developing Common Core-aligned tests. And the PARCC exams that will be given this spring aren’t much shorter than the new Indiana ISTEP+. 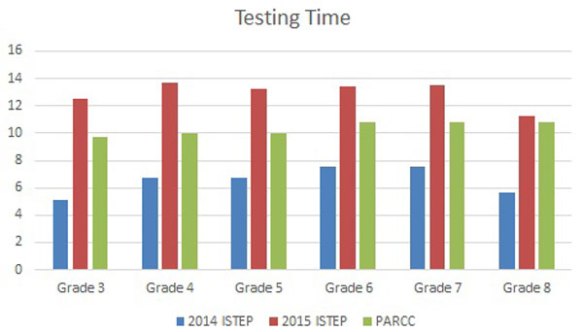 When the word came out that ISTEP+ was more than doubling in length, some parents and teachers were outraged. A pediatrician told the State Board of Education last week that forcing young children to sit for such lengthy tests amounted to child abuse. END_OF_DOCUMENT_TOKEN_TO_BE_REPLACED

The way Indiana legislators’ are trying to fix the state’s education governance system calls to mind what an American officer reportedly said during the Vietnam War: “We had to destroy the village in order to save it.”

The lawmakers say they want to save the system from the dysfunction that’s come with feuding between Democratic Superintendent of Public Instruction Glenda Ritz and the other 10 State Board of Education members, all appointed by Republican governors.

But their approach is to blow up a structure that has served Indiana well for many years, even when the elected superintendent and governor were from different parties.

Their main weapon is House Bill 1486, approved last week on a party-line vote by the House Education Committee. It transfers significant elements of education authority from the Department of Education, headed by Ritz, to the State Board of Education.

The bill authorizes the board to hire an executive director and staff and to employ outside contractors. And the board is going to need a lot of help if it takes on all the duties described in the bill. They include new responsibility for turnaround schools, teacher evaluation, standardized tests, state learning standards and audits of federal and state education programs. END_OF_DOCUMENT_TOKEN_TO_BE_REPLACED